Taxpayers can now find a new facility on the GST portal. The GST Network (GSTN) has launched a new feature for taxpayers whose GST registration was suspended due to the continuous non-filing of GST returns any day after 1st December 2022.

The new facility allows the proceedings for suspension of GST registration to be dropped on the GST portal. It will enable the taxpayer to revoke the suspension of such registration that is suspended. The move is a significant relief for aggrieved taxpayers.

The new facility was announced on the official Twitter handle of GST Tech or @Infosys_GSTN. The announcement mentioned that taxpayers could initiate the “Drop the GST Registration cancellation proceedings” option. However, this option is not available for taxpayers whose registrations were suspended before 1st December 2022.

Suppose a taxpayer’s GST registration is suspended and may be cancelled as they have not filed GST returns for the past six months. Later, the taxpayer filed all their pending GST returns upon receiving a system-generated Show Cause Notice (SCN) from the GST system. They can initiate drop proceedings using this new facility.

Previously, there was no such option on the GST portal even when the taxpayer submitted the pending returns. Accordingly, they were inconvenienced by the continuation of the suspension of the GST registration, especially when they missed responding to the SCN but filed the returns.

With the new feature, such taxpayers can avail of drop proceedings independently. They can revoke their suspension with a click of a button, provided the GST returns are filed to date.

Usually, taxpayers find that the cancelled GST registration is restored within 15 minutes of filing GST returns. However, they can go for the ‘Initiate Drop Proceedings’ facility if the revocation does not take place automatically. 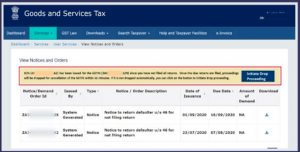 For any clarifications/feedback on the topic, please contact the writer at annapoorna.m@clear.in