The 33rd GST council is set to meet on the 20th of February and will be chaired by finance minister Arun Jaitley. The Council is expected to consider the reports of two ministerial panels on real estate and lottery.

Earlier on Monday, a state ministerial panel set up to review tax rate on lottery favoured a uniform GST rate of either 18 per cent or 28 per cent, a final call on which would be taken during the GST Council meet.

The agenda for the 33rd GST Council meet:

While the GST council is all set to meet on the 20th, some state Finance Ministers insist on a meeting one-on-one. In a letter addressed to the FM Arun Jaitley, a total of six states FMs – Delhi, Kerala and Punjab included – have urged him to postpone the meeting and requested physical presence for the meeting. 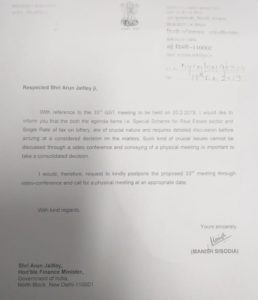 With issues as elaborate and important as lottery and real estate on the agenda, Delhi FM Manish Sisodia insists on a one-on-one meet since such “crucial issues” cannot be discussed via video conferencing.